Welcome to the Food Planet: Bountiful, Beautiful, but Broken

Providing for us all, but running out of power, planet Earth is in danger. The way we produce and consume food is largely to blame. To ensure a resilient and plentiful future, we must change course now and start reshaping the food system. But first, we must understand how food interacts with the planet, our societies, and human health.

We coined the term Food Planet to illustrate the interplay between the global food system and the Earth system spheres: the geosphere (land), the hydrosphere (water), the atmosphere (air), and the biosphere (all living things, including us humans). This framework is a cornerstone of our work.

At the core of the issue is a paradox: the global food system is exhausting the planet's resources it depends on. Impoverished soils, plundered oceans, biodiversity loss, and global warming are some of the consequences of this overexploitation. Which inevitably leads to lower yields. But with a rapidly growing global population, it continues to squeeze as much productivity out of nature as possible.

Can the Food Planet cope? Only if we reshape our food system – from production to consumption – within the limits of our planet.

For a better understanding of the Challenge, we frame it with three main concepts: Planetary Boundaries, People boundaries, and Ten Years at best.

For planet Earth to continue to host life, human activities can only alter the environment within certain limits.

The Planetary boundaries concept defines the safe operating space we should stay within to avoid irreversible environmental degradation. It was developed in 2009 by a group of internationally renowned scientists led by Food Planet Prize Jury Co-chair Johan Rockström.

The researchers identified nine biophysical processes that regulate the stability of the planet’s climate and life-support systems. Each has its own quantitative boundary. Five – climate change, biodiversity loss, land system change, novel entities, and biochemical flows – have already been transgressed. And the upcoming update promises to be thin on good news. Prof. Rockström recently hinted on Swedish Radio that the freshwater boundary is likely to have been breached too.

Transforming our food systems is the single most effective way to revert to safety, as pointed out in his Netflix documentary Breaking Boundaries. All nine boundaries are indeed intrinsically linked to what we eat.

The planetary boundaries framework defines the space within which humanity can operate safely for generations to come. Today, we have exceeded five boundaries.

Across the globe, humans are rapidly turning forests, grasslands, wetlands, and other land types into agricultural land. The practice destroys these ecosystems and releases carbon they store. Which, in turn, drives biodiversity loss and global warming. We are in the red zone for this boundary.

The number of species in our ecosystems is decreasing by the day. Food production is the primary cause behind the present mass extinction but also a victim of it. In the past 50 years, our food sources, for example, have vanished from thousands to just a few handfuls of species. Biodiversity loss is deep in the red.

The more we release greenhouse gases (GHGs) into the atmosphere, the warmer it gets on Earth. Currently, record high temperatures cause sea ice to melt at unprecedented rates. We are in the yellow zone for this boundary, meaning the planet’s climate is at risk of changing forever. And once again, the food system is the largest GHG emitter.

Emissions of toxic and long-lived substances like organic compounds and heavy metals compromise the biosphere, ecosystems, and human health. Long unquantified, researchers recently revealed that chemical and particularly plastic pollution had reached unsafe levels. And food and drink packages alone account for 16% of all plastics ever produced.

Humans add different kinds of aerosols and pollutants to the atmosphere. Nitrogen fertilizers obsessively sprayed over crops and fumes released when burning crop residues are 2 of them. Aerosols affect the hydrological cycle like the monsoon rains, while pollutants cause around 800 000 premature deaths annually. The boundary for aerosol remains unidentified.

About one-fourth of the carbon dioxide that humans are emitting is absorbed by oceans, dropping their pH level. As many marine animals have difficulties adapting to these acidified environments, marine ecosystems we depend on for food supply risk collapsing. We are barely within boundaries but still can bring oceans back from the brink.

The use of fertilizers in industrial agriculture is changing the biogeochemical cycles of nitrogen and phosphorous. Since plants only absorb part of the added nutrients, the remainders wash out to and overfertilize aquatic environments, which become eutrophic and oxygen-depleted. With the Baltic Sea at risk of dying, this boundary is deep into the red.

Even if there is a lot of water on Earth, only a tiny fraction is available to humans, and its scarcity is becoming more acute. Scientists predict that 500 million people will live under water stress in 2050. Since 2500 out of the 3000 liters of fresh water we use daily come from our food production, the latter is a crucial lever of change.

The planetary boundaries framework defines the space within which humanity can operate safely for generations to come. Today, we have exceeded five boundaries.

Beyond zone of uncertainty (high risk)

In zone of uncertainty (increasing risk)

The fallout of operating outside the safety zone

The food sector plays a significant role in pushing the environment beyond planetary boundaries. Despite some positive trends, too much of our global food system remains wasteful, polluting, destructive – sometimes all at once.

Taken as a whole, food production, distribution, and consumption is the largest emitter of greenhouse gases, contributing over 30 % of total emissions. It accounts for 40% of global land usage and 70% of all freshwater withdrawal. It is a major polluter of soil, air, waterways, and oceans.

Today, food production relies heavily on intensive, chemical-driven agriculture, depleting freshwater resources and amplifying acidification and contamination of waterways and marine habitats. It also depends on livestock production, which uses more land than any other sector on the planet and drives deforestation. Even more alarmingly, our monoculture crop production is the single most critical driver of biodiversity loss.

To protect the biosphere – and ultimately ourselves – we must establish a safe and resilient food system, and the planetary boundaries framework is an effective guide for doing just that.

Read more about the Planetary Boundaries

The Urgency: Ten years at best

This is a red alert if there ever was one: According to the UN Intergovernmental Panel on Climate Change [IPCC], a shockingly short period – ten years, at the very best – remains before we reach irreversible climate tipping points. Other threats to the integrity and health of the biosphere are approaching critical thresholds equally fast – and we may have transgressed them already.

Human activity has caused approximately 1.1°C of global warming above pre-industrial levels. That figure will likely rise to 1.5ºC by 2050 if emissions continue to increase at the current rate. Staying within the 1.5ºC is a target that most scientists and politicians have agreed on as a global survival strategy. Yet, its implementation is faltering badly. As things stand now, the world’s food systems could get in the way of meeting this target. The pathway is genuinely self-destructive. If greenhouse gas emissions continue to rise at their current rate, a third of global food production will be at risk by the end of the century.

Clearly, we need to reinvent the global food system. Tomorrow is too late. We should have acknowledged the signs and started long ago.

“We’re starting to feel the impacts of today’s unsustainable food systems, both on global warming and on the basic functions of our planet. A food system shift is vital; it requires political will, ample funding, and the right ideas.” Professor Johan Rockström, Co-chair, The Food Planet Prize

Existing strategies to shift direction – such as developing alternatives to chemical-driven monoculture farming or reducing excessive global transport for year-round availability of seasonal products – are necessary but insufficient. To reverse the trajectory, we must also find radically innovative and even disruptive solutions throughout – from agriculture and other primary production, food processing, transportation, and distribution to consumption and waste management. We must rethink, reshape, and re-engineer food at every link in the chain. We have to establish a safe operating space for the global food system in all its complexity. 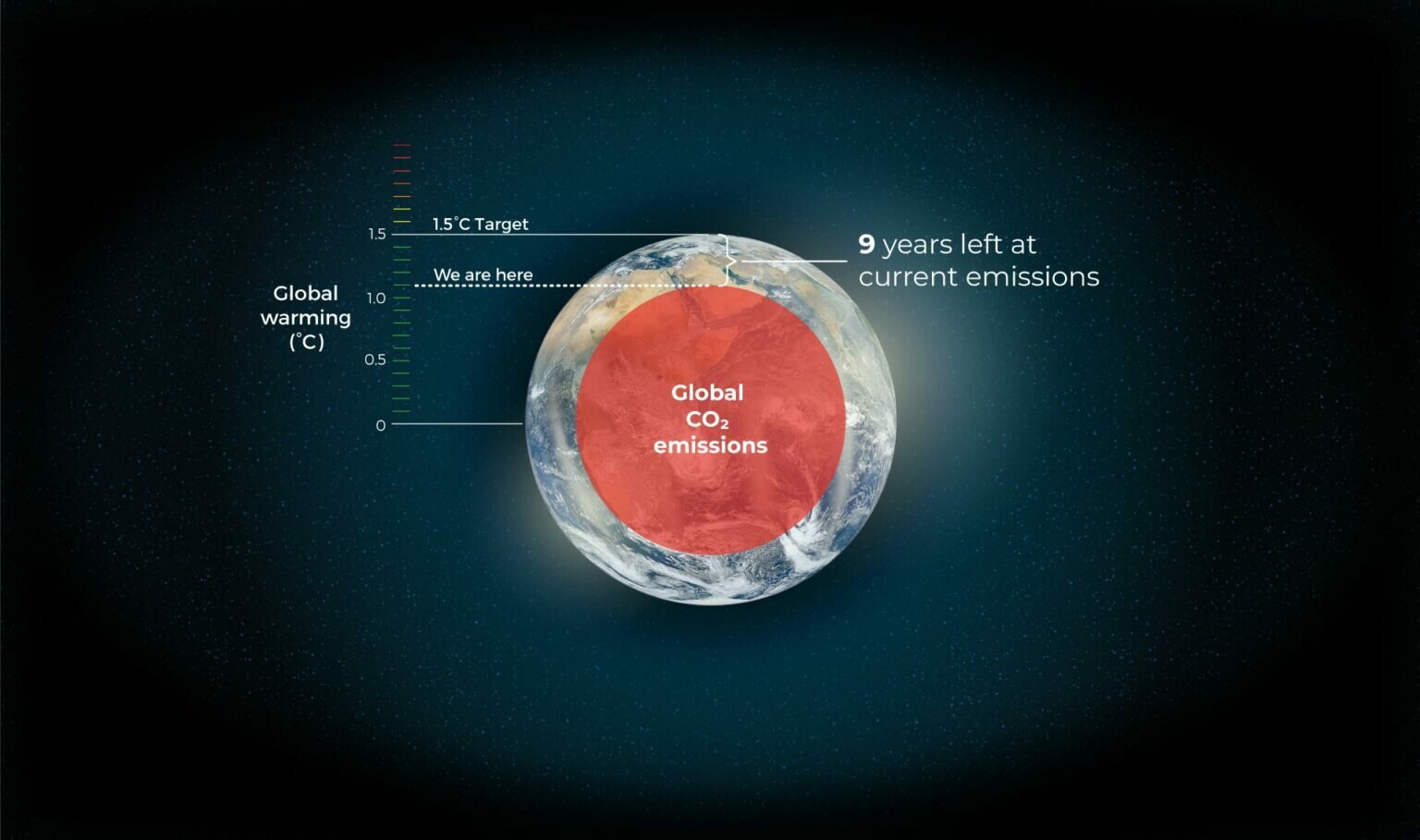 Red alert. As things stand now, the world’s food system could get in the way of meeting the 1.5°C target

People boundaries: Can we avoid eating our way to the last supper?

We live in the Anthropocene, a planetary epoch defined by humans’ impact on the Earth’s geology, climate, and ecosystems. This impact has now become so threatening that the habitability of the planet may be at stake. Today, the global population is nearly 8 billion. As it increases rapidly—scientists predict it will grow by about 70 million per year and reach almost 10 billion by 2050—we’ll put even more pressure on the planetary boundaries, with mounting risk of crossing critical tipping points for the Earth’s resilience and stability.

The Earth is theoretically capable of feeding 10 billion people, just not how we do it today. If our ecosystems collapse, we face a future without food. Our food system is in acute need of reinvention; it’s an existential issue.

How to safely feed a growing population, meet climate goals and reduce poverty

For a long time, food security, i.e., access to sufficient food, was on the right track. In the past number of years, progress has turned in the opposite direction, propelled, not least, by the pandemic, which, according to the UN, risks reversing that development by 25 years.

Our food systems interact with human and societal health at least as much as it does with planetary health, at times – as during the pandemic – notably more. Malfunctions, violations, and leakage from the global food system to our living environment harm humans in numerous ways, not only through food-related disease provoked by our continuous infringement on natural habitats. Food system flaws also undermine and sometimes disrupt societal structures, even leading to failed states. Drought, resulting in water and food scarcity, is a significant driver of conflict, migration, and even war. ­­

Two of the UN’s SDGs, “Zero Hunger by 2030” and “Good Health and Well-Being”, seem far from attainable in this decade. The pandemic’s direct effects on mortality, combined with indirect effects such as under-treatment of other diseases and increased infant mortality, have lowered global life expectancy by several years.

The pandemic has also focused our attention on food safety. Although the source of SARS-CoV-2 infection – the infectious agent that caused the COVID-19 pandemic – is not fully understood, it’s most likely linked to food markets in Asia, where the virus moved from bats to humans via one or more intermediate host animals. Zoonotic diseases – transmitted between animal species and humans – have become increasingly common. Many of them, such as swine and bird flu, are directly linked to the food system and, above all, large-scale animal husbandry. Others, such as COVID-19, are caused by encroachment on wild habitats, which have made it easier for viruses to transmit to humans. 75% of all infectious diseases spread to humans from animals, and 50% come from the agricultural sector.

According to the Global Footprint Network, the pandemic did nothing to reduce the ecological footprint that our food system generates. Despite lockdowns and stalled productivity, it actually grew along with food waste, food insecurity, and malnutrition.

Keeping a growing world population alive and well-nourished – without destroying the planet. That’s our challenge – and the fundamental existential issue. We must save the Food Planet so that it can continue to feed us all safely and sustainably.