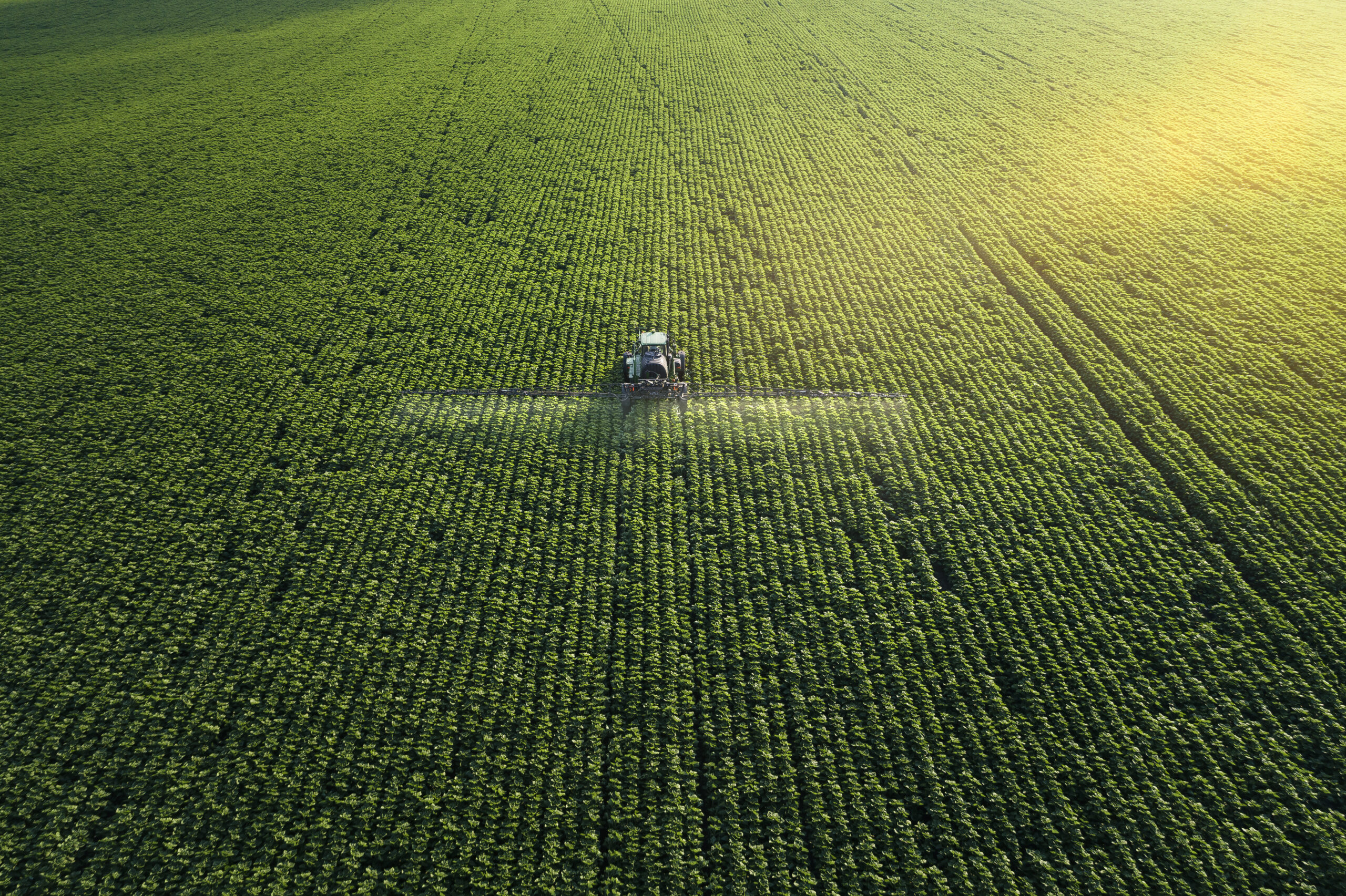 Tracking shot. Drone point of view of a Tractor spraying on a cultivated field. Small Business.

Improved efficiency has enabled us to use less land to feed more people. Since 1961, the amount of arable land area needed to produce the same quantity of crops has declined by 70%. But that efficiency comes at a cost. Intensified land use can cause chemical contamination and pollution, salination, soil erosion, nutrient depletion, and overgrazing. Transforming natural landscapes for economic gains – i.e., farming and animal husbandry – frequently results in deforestation and desertification.

Three main phenomena drive the expansion of pastures and cropland that is putting mounting pressure on land resources. First, a growing global population and increased consumption of animal products in developing countries – more and more households are entering the middle class, giving them the financial means to buy comparatively expensive foodstuffs like meat. Second, a rising demand, especially in developed countries, for biofuels and biomaterials that are derived from plants and fungi. And finally, a booming need for new, ever-larger planting areas as agricultural land degrades and becomes less fertile—or is converted for urban development.

The very things we do to increase food production are threatening the soil and land health that are the cornerstones of food security—and ultimately, our existence as a species. The term “soil health” refers to the soil’s capacity to function as an essential living ecosystem that sustains plants, animals, and humans. That health has declined significantly over the past century. Many soils degraded through land-use change contain fewer macrofauna, are less fertile, and less able to perform critical functions like water filtration – the natural cleansing of water by the soil as it makes its way into the groundwater. According to the UN’s Global Land Outlook, we are losing fertile soil at a rate of 24 billion tons a year. If we continue this business-as-usual scenario, by 2050, the per capita global amount of arable and productive land will fall to a quarter of its 1960 levels. Unhealthy soils mean we will no longer be able to grow enough food to feed the world.

Soil is not only the backbone of the food system; it also plays a crucial role in absorbing carbon from the atmosphere. Soil is the planet’s greatest carbon sink. According to the UN Intergovernmental Panel on Climate Change (IPCC), ecosystems on land have absorbed almost a third of all human-caused carbon dioxide emissions. Still, this carbon sink is now in peril because of how we use and mismanage our land.

Healthy soils contain over twice the amount of carbon found in trees and other kinds of biomass. Less healthy soils lose their ability to store carbon effectively, which creates yet another vicious cycle: reduced storage capacity makes the world hotter, and hotter temperatures degrade soils further.

Drought, land use, and soil health are interconnected. Healthy soil retains water, which in turn supports the plants and other organisms that grow there. But a lack of rainfall will quickly disrupt this system. While the effects of droughts may not be immediately apparent, they can be devastating and deadly. New research suggests that by the late 21st century, the global land area and population facing extreme droughts could more than double. And as drought occurs more frequently, it can make it increasingly difficult for the soil’s water reserves to recover in between dry spells.